Women in Drama: A chat with Acting teacher Claire Amias 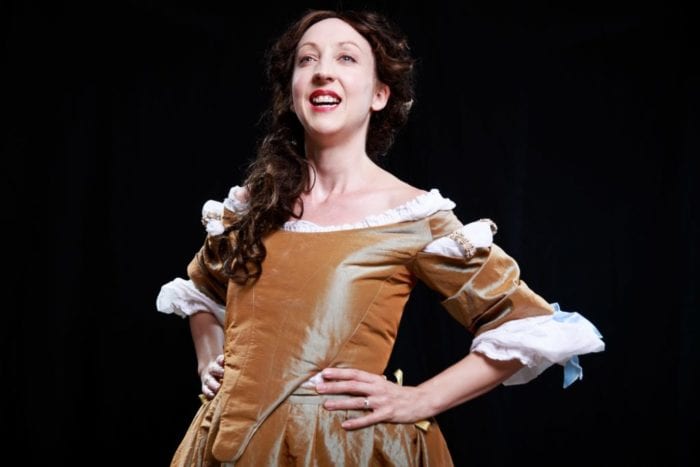 The history of women in drama has been contentious – even in Shakespeare’s plays all the female characters were played by men. While we can appreciate that the industry has progressed since, there can still be barriers for women to feel recognised in the performing arts.

We decided to chat to our highly valued Acting teaching Claire Amias who has an extensive background as a performer, director, producer, writer, amongst other things. She offered her thoughts on how she has developed as women within the performing arts industry.

Where did you grow up and how did you discover your passion for the performing arts?

Performing is something I’ve done from an early age. My brother and I would always put on plays for our grandparents in the sitting room. Sometimes we’d write or devise something, other times we’d get a short play or poem from a book and perform it. When I was at primary school I wrote and performed in plays at assembly times. At secondary school there was no culture of drama really, and it wasn’t until my English teacher agreed to work on Shakespeare monologues in the lunch breaks that I was able to start acting again. This made a huge difference to me, and I will always be grateful to him for giving up his free time to do that. I also had work experience at the Harrow Arts Festival, organised by the same English teacher. My friend Rachel and I were set loose in London, seeing West End shows and helping with the marketing for the festival – most importantly we got to help out backstage. This brought me into contact with professional actors who gave me realistic but inspiring advice. After that I performed in a few plays with the local Central Youth Theatre in Wolverhampton, and I left school to do my A Levels at a Sixth Form college which had a Theatre Studies course.

What kind of training did you undergo?

I auditioned for drama school and got into Bretton Hall, where I spent three years training on a BA Acting degree course. I began working professionally while I was there, getting a role in a touring production of Romeo and Juliet that started rehearsing two days after the last performance of my final year show. From that production I got my first agent. I worked for ten years on stage and screen, which included plays at the Finborough Theatre and West Yorkshire Playhouse and quite a few feature films and commercials. I felt that if I wanted longevity in the profession, particularly as a woman, I should go back to drama school and do an MA, so I could develop my skills in theatre-making as well as acting. There are far fewer acting roles for women, and quite a lot of the roles available are frustratingly weak. There’s a sense of being in control when you create your own work as a performer. I got a place on the MA Text and Performance Studies course at RADA, which not only included acting but also classes in directing, writing and dramaturgy. I’ve just got a place on a play-writing course at the National Theatre and I still take part in the odd singing and acting class to keep on form. I believe in ongoing training as a performer. Sometimes it’s good to get out of your comfort zone and learn new skills or develop old ones in a new way – it stops you getting into bad habits. I continue to act on stage and screen, but I have also had two successfully produced plays, one of which had a run in the West End last year to critical success.

I can’t really name just one, but I’m particularly proud of the two shows I wrote and performed, based on the life of the first professional female playwright, Aphra Behn. The first is The Masks of Aphra Behn, which is a one-woman show about her time as a spy for King Charles II in the Dutch wars. The second is a follow-up to that – a two-hander called Oranges & Ink about the friendship between Behn and Nell Gwyn. Both plays got some wonderful reviews and I received a lot of passionate audience responses.

The other projects I’m particularly proud of are Women of Twilight and Borley Rectory. The first was a forgotten play from the 1950s by Sylvia Rayman, brought back to the stage by Jonathan Rigby to great critical acclaim; my favourite theatre reviewer, Lynn Gardner, wrote in The Guardian that “Claire Louise Amias is magnificent as Vivianne.” Borley Rectory is a part-animated feature film, directed and animated by the extremely talented Ashley Thorpe, in which I play the extremely spooked resident, Mabel Smith, of ‘the most haunted house in England’. It was entirely shot in green screen and each frame’s backdrop is exquisitely animated. It was released on Blu-ray by Nucleus Films last October.

What has your experience been as a woman in theatre – from your earlier years to now?

One of my first professional acting jobs was a site-specific play celebrating the history of Leeds in the beautiful City Hall. I was rather naïve at 22, but even then I thought it was odd that I was the only woman in a cast of five, especially when it was a celebration of the history of a city. The role I’d been given was a woman who was famously poisoned by her husband, so I was a secondary victim role to the husband. Other characters were a notable judge, the architect of the City Hall and some other white male dignitary.  I shrugged it off, thinking, ‘OK, well maybe there just weren’t many notable women from the city’s past.’ Then I found out two things. Firstly, I was paid a lot less than the male actors; secondly, there was a blue plaque dedicated to a well-known suffragette in the actual building we were performing in – and I passed this plaque every day on the way to perform my scenes. I was fuming. I did nothing, as I felt completely powerless as a young freelance actor. I’d like to think I’d at least question this situation now. Diversity has come a long way since then, but there’s still a long way to go. For me, by having power over at least some of the roles I play (usually strong- willed, complicated, amazing yet flawed women), I feel I’m part of some kind of change, or if not that, at least presenting the sort of female roles that aren’t seen as often as I’d like.

What do you think the biggest challenge women in the industry face?

Right now, I think the biggest challenge for women is being taken seriously as directors and writers. The percentage of women in these roles in major national theatres is still very low. And until there are more women writing the stories, and choosing the stories that are presented, then there’ll be no trickle-down regarding the amount (and type) of roles available to female actors. This problem is even more acute on screen.

What is some advice you have for aspiring performers/producers/writers who might be afraid to take the next step forwards?

Go and get some training at a good institution. You’ll meet like-minded people you may want to work with in future, as well as casting directors, agents and directors. You’ll have space to develop your skills. Then just go out there and do it. Even if you have an agent, apply to be in plays and films from your own research on industry job sites. Create your own work if you have writing, directing or producing skills. Be brave. If you want to write a play – set yourself a realistic time-frame and tell people you’re going to do it. Then you have to do it! If you want to direct a play, find one, submit a proposal to a theatre and put it on. Surround yourself with inspiring but honest people who aren’t afraid to tell you if your idea needs work. But avoid negative people. Work breeds work. And create the sort of work you want to see. And if you don’t want to create your own work, be the sort of actor you’d like to work with or see performing.

Thanks for the candid insight Claire Amias. Work with this talented instructor in her Acting for Beginners/Confidence , Acting Company, and Acting for Intermediates courses.