We Stand in Solidarity with the Black community 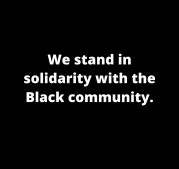 As a principal of a kids stage school I often avoid talking about politics. I don’t think it is our place to influence one way or the other. And as such I often find myself keeping my views to myself apart from the odd friendly debates with close friends.

But sometimes incidents come along that can’t be kept silent.

I have seen reactions on Facebook from White, Asian and Black friends. A notion is present that unless you speak out it must be you are racist. I don’t necessarily agree with that as some people may have a lack of confidence or fear of saying the wrong thing.

I must admit, I contemplated saying nothing simply because I was worried about saying the wrong thing or using a phrase that may be offensive without meaning it to be. I have sometimes got confused as to what phrases we should be using and what phrases we should be avoiding. Obviously I need to educate myself as to what is and isn’t acceptable. We all have a responsibility to one another. None of us are living in a vacuum.

I have also been guilty of using phrases such as “I was colour blind”. But I genuinely thought I was. But having read a few articles this week I realise by saying the phrase “colourblind” it is not celebrating the beauty of one’s identity but almost ignoring it as if it is something to be ashamed of.

I have also struggled with the term “white privilege”. As a child and teenager I had my own angst to deal with. I always felt different to my peers. I was half catholic and half Jewish with an autistic mother. How on earth was I privileged? Yes I had very loving parents who were devoted to me but we didn’t have loads of money. Everything I have achieved I have had to work for. However, I now realise that the word “privilege” in the context of “white privilege” does not mean what I thought it meant. I am privileged not having to deal with constant racism or being wrongly judged because of the colour of my skin.

The performing arts industry is notorious for being elitist and not providing adequate roles for ethnic minorities, as an organisation we are proud to have offered a platform to young Black performers and we are committed to continuing in doing so.

I will also continue to educate myself and expect the same from colleagues, peers and friends.