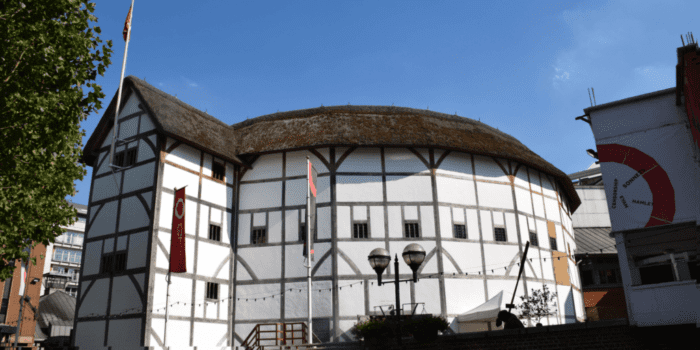 Last week, I had the privilege of seeing Shakespeare’s Globe performance of Richard II, directed by Adioa Andoh and Lynette Linton, performed by “the first ever company of women of colour in a Shakespeare play on a major UK stage.” The play took place in Sam Wanamaker Playhouse and was gorgeously decorated by dozens and dozens of candles. There were four huge chandeliers hanging down from the ceiling whose light emanated from tall, skinny candles, and there were two platters of a dozen short, stout candles at the very front of the stage on the floor. The chandeliers were lowered and raised from the ceiling to the floor several times during the performance depending on the setting of the scene. I trepidatiously watched as the flames wobbled along the journey. There were sconces containing two candles on every pillar and often in characters’ hands during a scene; there was even a tray of candles attached to the front of the balcony that actors used during the play. For some scenes, there were extra candles lined down the centre of the stage. During some scenes, actors held real flaming torches and made small campfires contained in a metal bowl.

Upon entering the playhouse, I was certain I was going to witness some sort of fire-related tragedy that night. On top of it all, the cast was dressed in east-Asian inspired costume, which included layers and layers of flowing cloths atop flowing pants, shawls over dresses, head scarfs, jewels, etc. Each swish of a cloak near a candle made my heart clench. Despite the tangible danger, I was in awe of the atmosphere these small fires made. The playhouse was warm, inviting, intimate, and regal due to this intense decoration. The women put on a phenomenal performance and beautifully integrated multi-cultural music and aesthetic aspects into the classic play. I was sat in the front row of the balcony, as far behind the thrust stage as I could be without being in the wings. I mostly watched the play from behind, often seeing the actors’ backs, but I didn’t mind because of how ludicrously beautiful the entire set was. I was engrossed in the brilliant, luminescent magic until it all at once turned dark.

During one particular scene, a trap door opened from the ceiling, and a prop was slowly lowered onto the stage. The prop was a two-tiered circle of bamboo sticks tied together, and it acted as a “tree” in the scene, behind which characters hid in a garden. Once the garden scene was over, the bamboo “tree” was slowly raised back up into the ceiling as the penultimate scene began, when the characters were heading to London to eventually witness the murder of Richard II. The actors were chanting a transitional song to get the audience settled into the shift in setting, and just as the scene was about to properly begin, the circle of bamboo plummeted back to the ground, and hit one of the actors (former Coronation Street actress Shobna Gulati). She had been holding a candle in one hand, and she was knocked hard onto her back. There she lay, sprawled across the back corner of the stage, eyes open, unmoving. The music stopped as soon as the crash of the prop sounded, and no one gasped. No one screamed. No one ran. No one did anything at all.

The audience was desperately trying to figure out if this was part of the play, or was a horrible accident. My gut lurched the moment I heard the crash, and I peered over the railing of the balcony to see the injured actor’s face, and to look for the rogue candle. There was no blood, and amazingly, no fire. Her candle must’ve snuffed itself out during the fall. I looked over at one of the musicians on the balcony and saw that she’d put down her instrument and was peering over the edge, too. That was when I knew I had just witnessed a very real and severe injury. The other actors on stage seemed not to know what to do for a moment, and then the one closest to the injured actor knelt beside her, touched her face, and put two fingers to her neck. “Emergency,” she stated calmly to someone in the wing. She then turned around towards the audience and said, “is anyone a doctor? First aid?” I grabbed my backpack, assuming everyone in the audience thought the same thing as me – that the respectful, right thing to do was to immediately leave. But no one did.