The Benefits of Performing Arts 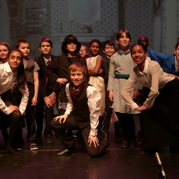 Singing, dancing, and acting- Oh My! These three aspects of performing arts are so very fun to watch and be part of. Being an audience member is a wonderful experience as you get to see and hear new things while you are filled with endorphins that make you feel good. Watching the performers one may think that it is cool, but what are the performers getting out of it besides the fact that they are entertaining a crowd. The fact is the performers are getting many life skills and benefits from their art. They greatly benefit from their arts socially, academically, and mentally. In this post, I will be focusing on the benefits of performing arts on children.

I think the most obvious advantage of the arts is that it can help with social interactions. Through performing, children can build confidence and self-esteem. They will also learn how to present oneself in a manner that is acceptable. A study where some students participated in a performing arts program for a year displayed improvement in their self-confidence, socialization skills, and teamwork. (Low & Satria, 2008). They also tended to feel a sense of belonging. Through performing with others, children are able to build lasting friendships with those who are going through similar experiences. It is always nice to have someone who knows what you are going through. Another aspect is interpersonal skills such as compassion and empathy. The children can learn and experience empathy through the characters they play. In my opinion, empathy is difficult to experience because it means being able to understand what another is feeling. This can be difficult for some, but through acting and even singing and dancing the performers are able to understand the emotions they may be portraying. The social skills learned through performing arts are quite immense.

Children in performing arts benefit greatly in their academics. Studies have shown that those who participate in the arts achieve better in reading, maths, and writing. Countries with the highest rankings in maths and science, such as Japan, Hungary and the Netherlands, have mandatory arts and music education as part of their school curriculum (Siversten, 2015). Another study showed that in the United States the more arts classes one takes, the higher their SAT score is. This is very interesting, because in the states, a lot of the funding for performing art classes has been cut, which is very unfortunate. I think that performing arts is very important and just researching the benefits is enough to convince me of the benefit it has on children. Participating in performing arts improves listening skills. Because there is so much direction in the various arts, those who participate in them are better at following directions. This makes the academic experience better and more efficient because they are not wasting time.

Being mentally healthy is important. Recently mental health has been a popular topic, which it should be as it is an important issue many people deal with every day. 1 in 10 children have a diagnosable mental health disorder (Green, 2005). The arts may give children an outlet to let out the emotions they are feeling. It can also give one confidence as previously discussed. They will have the confidence to stand up to a bully or the confidence to be themselves and not worry what others think of them. The national institute of mental health explains that some mental illnesses can be affected by a prolonged state of being stressed. The arts can help minimize this stress. For example, problem solving skills are gained. Various things can go wrong during a performance, rather than getting stressed or upset, the performers must be able to think on their feet and work together to minimize the mistake. This is beneficial in the real world as the children will be less likely to freak out over something that has gone wrong, rather they will be able to use the skills they have learned to solve the issue. There are so many ways the arts can help reduce stress. Of course, this is only one aspect of mental health, but it shows how something so little can help with it.

The performing arts are very important and should be a more crucial part of society today. I know there are many skeptics out there who believe that the performing arts are not beneficial. But, the facts are there to prove that performing arts have many advantages. Many studies and research have been done to prove this. People should recognize the benefits that dancing, singing, and acting have on children and what they will be able to achieve because of it. The arts really do assist children in everyday life and prepares them for the real world.