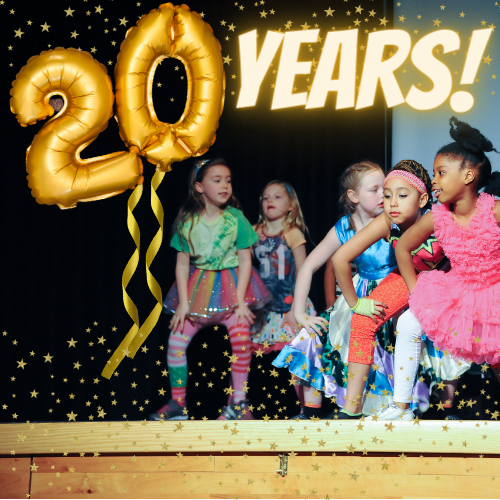 Twenty years ago on 12 January 2001, actress Anna Fiorentini opened the very humble doors to what would go on to be the Prince’s Trust supported, award-winning, hugely successful Anna Fiorentini Performing Arts School with branches all over London. The school would flourish, housing their own charity – The Fiorentini Foundation to help children with, or affected by severe illness and giving access to the arts to children from marginalised communities; The Fiorentini Mosson Agency – representing a diverse and eclectic array of young talent, and finally, Stage & the City – offering affordable and fun after-work performing classes to adults.

In 2001, Anna watched nervously as the first ever 70 students stepped in to join part-time acting, singing and dance classes in a small, freezing cold community hall in Hackney. She hoped she would just about break even, willing herself to remember why she embarked on this venture in the first place. The reason was to bring affordable, reliable, glass-ceiling-smashing professional arts training to the young people of Hackney, who were so often overlooked.

As a trained actress from Hackney herself, Anna had seen first-hand the lack of any escapist, inspirational after-school and weekend classes for children to boost their confidence, learn valuable life and social skills and have fun. Now, of course you can’t escape the cacophony of drama classes for children but at the time, what Anna was doing was ground-breaking. She was a pioneer of sorts, paving the way for children from marginalised, often BAME communities to be seen and heard.

Over the years, as Anna relied solely on her own tenacity to build the business, she saw more and more young people’s self-esteem grow as they took part in the classes she offered. The school launched the careers of numerous inner-city children including:

•  Tahj Miles, whose West End credits include Lion King, Oliver! and Matilda. Tahj is currently a lead in BBC TV series Death in Paradise.
•  Belinda Owusu who, through the agency, landed a five- year contract playing Libby Fox in EastEnders and is now a regular on Holby City.
•  Orla Hill was the lead child star in feature films Swallows & Amazons and Song for Marion.
•  Jayden Osheneye played Fletcher in the UK tour of The Bodyguard and then went on tour to China and Canada.
•  Xavien Russell was one of the leads in series 1 & 2 of Top Boy
•  Jermain Jackman who trained with at Anna Fiorentini Performing Arts School and won The Voice UK in 2014.
•  Four of Anna’s students also appeared in Steve McQueen’s recent smash hit, Small Axe.

Although heaped with success, the business has not come without its own setbacks, the biggest, of course being Covid19, which struck just a year before the twentieth anniversary of Anna Fiorentini Performing Arts School.

The pandemic decimated her small business, as it has done for so many. Anna was forced to take out a disruption loan which she will be paying back for the next ten years, and this will only support the business until April. The Fiorentini Foundation which raises money for young people with, or affected by severe illness or those from marginalised communities by offering them subsided or free performing arts training, giving them much-needed escapism, has been hardest hit. All fundraising events last year had to be cancelled and they could support no new children.

But through the darkness there has been some light – fundraisers have stepped forward to help in whatever way they can. Whether that be current students putting on online talent shows to her own staff cycling 150 miles over lockdown. Yet again, Anna was forced to rely on the tenacity that helped her stabilise her business twenty years’ ago to save her company. Anna Fiorentini Performing Arts School is by no means out of the woods yet and Anna is doing all she can to ensure the business survives. Due to social distancing, Anna had to cut student numbers in half, and then came the third lockdown. All classes were moved online, and her team anxiously worked towards face-to-face lessons again in the future. Now with doors reopening, we can work towards building the school back up again.

Although this twenty-year celebration is not what she hoped it will be, the ever-positive Anna will be pushing celebratory events to 2022 such as the Hackney Empire Showcase. Now, more than ever Anna is remembering the faces of the young people she has encountered over the twenty years that have had their lives transformed through the affordable and inspirational part-time training she offers. She’s not giving up yet.

Here’s to another twenty years!

To celebrate twenty years since the School first opened in Hackney, we are currently recruiting volunteers to run the Hackney Half Marathon on 26 September 2021. Funds raised will go to the Fiorentini Foundation and help in its mission is to break down the barrier of privilege and bring the performing arts to all children no matter their background. If you are a keen runner, or know of anyone else who might be, please click here to register your interest.

We are always on the lookout for people who would be interested in participating or running fundraising events so that supportive schemes such as bursaries and other forms of financial assistance can be continued. Whether it be a one-off donation, or a fundraising collaboration, community support will make a big difference to the students, now and in the future. To find out how you can support us, please click here.