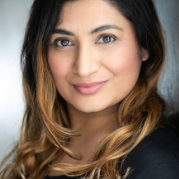 We are giving a special welcome to another Fiorentini’s Got Talent 2019 judge, Harveen Mann! Harveen is close to the Anna Fiorentini School family, having collaborated in lessons and on projects for the last five years. When she isn’t in the classroom, she has enjoyed an illustrious career in the industry – both on the West End and television.

Notable stage performances include playing Pinky, Mrs Chopra, Auntie, and Understudy Mum in Bend It Like Beckham, and she has recently returned from playing the female Swing in an international tour of Andrew Lloyd Webber’s School of Rock. Film and television credits include work on Doctors, and Harveen has been a backing vocalist for ITV’s X-Factor and Britain’s Got Talent (how appropriate!).

What attracted you to begin a career as a performer?

When I was at school (year 8) I did a production of the wizard of oz and I realised that’s all I wanted to do for the rest of my life…be on stage that is, not live as a munchkin!

What has been your greatest accomplishment professionally?

I have been made an Associate of the Royal Academy of Music for my contribution to the Musical Theatre Industry. I am blown away by that!

Do you have a dream role you would like to play someday?

I don’t really have a “dream role” I just love to work!

As someone who has taught children with the Anna Fiorentini School, and adults with Stage & the City – what would you say adults could learn from children?

Adults can learn so much from children. Mostly to be fearless and make bold choices!

How have you matured as a performer – what are the biggest changes/developments you’ve made personally?

I have learned that performing isn’t the only thing in life that is important. It makes me happy but so do my friends and family – so if I don’t get a job, it’s not the end of the world!

Do you have any funny anecdotes/stories with another industry professional?

A huge highlight for me was being at the Olivier’s on the red carpet and Cindy Lauper telling me that I was beautiful!

What is one piece of advice you would be able to give to any novice or professional performer?

Never give up. There is always something good coming around the corner!

Can you give any tips to our contestants before Fiorentini’s Got Talent 2019?

Be confident and enjoy every moment!

A woman of many talents, Harveen has written, produced, and directed an original piece of musical theatre “Mad, Crazy, Love” – catch it at the Tower Theatre on Friday the 22nd and Saturday the 23rd of November 2019.