How Performing Arts can benefit Everyone 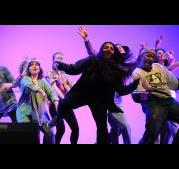 One of the more recent steps I’ve taken to increase my happiness is to start going to a regular dance class. I sat down and wrote a list of things that made me happy, and then considered how I could do more of them. Climbing and dancing were right up there on the list. Then I was lucky enough to find this total beginners dance class which is very silly and very fun. I also started swing dancing and found a gang of people to climb with.

I’d say spending one evening a week dancing and one evening climbing has made a massive difference to my happiness. I feel much better in my skin because my body is used to exercise, and I’ve also made some really nice new friends. It also has a lasting effect across the rest of the week. Even when the rest of my life feels a bit gloomy, I’m looking forward to Tuesday evenings to get my swag on. (That’s what Beyoncé calls it. I’m not 100% sure I’ve used the term correctly. Don’t judge.)

Can I encourage you all to take a moment out of your day to watch this cockatoo getting his swag on to Backstreet’s Back. You might have watched it before, but it’s worth a repeat. Apparently there are very few animals that can actually dance, i.e. move spontaneously to a beat – mainly different types of parrot and the odd Asian elephant. But we humans are at it all over the world. Dance seems to be a natural instinct for us, with almost all human cultures having developed some form of dance. Apparently the evolutionary reason for this may be to spot genetically robust mates, to ward off other people from your mate, and/or to foster a sense of community.

To be honest, none of these fully feel like they capture the whole picture. For me, there is something about switching off the analytical part of my brain and putting my focus into moving instead that feels amazing. Also, there is a big difference between how I feel practicing a dance move to a teacher saying “ONE two three four, ONE two three four” to when they play the music and switch it up loud. Suddenly I get a jolt of energy and joy and just let rip.

There is a lot of evidence that dancing is good for you, physically and mentally. In fact, one study even indicated an 8-week tango course has comparable effects to an 8-week meditation course, decreasing depression and increasing satisfaction with life, effects that were maintained even a month after the courses ended. Another study showed reduced depression following salsa lessons, though over half the participants dropped out – a common problem in my experience with dance classes.

I’ve also seen evidence that dancing can help with cognitive health, as anything does which requires you to learn new stuff, and memorise things, e.g. complicated moves. It also helps with decision making as you have to decide which move to make next, and seems to delay dementia. And the range of movement and balance required in most dances mean it is particularly good exercise for the body shaping.

Although there is lots of research implying dance is the bees knees, I don’t think it has to be dance to get the happiness hit. If anything, my climbing evening is more important to me. I just think the key is to spend one night a week doing something purely for your own enjoyment, especially if you feel like you are improving at it. We can be blocked by the fear of having to face a class full of new people or worrying we won’t know the right steps. But it can transform your week, even when you have to drag yourself out after a tough day at work.

Written by Izzy McRae for the Huffington Post UK