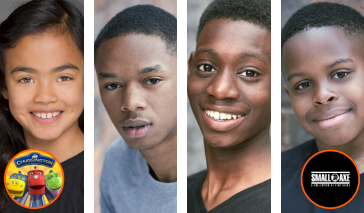 We don’t like to boast but our agency clients are absolutely making waves in the industry with Golden Globe nominations and the story of one little lady taking to the screen… or should we say rails in BBC and Netflix’s, Chuggington!

Xavien Russell (previously in Top Boy Series 1 & 2), Jaden Oshenye (previously in West End and UK & international tours of The Bodyguard and the RSC’s Macbeth) and Nathan Moses all took roles in Small Axe directed and co-created by the Oscar-winner, Steve McQueen. This phenomenal British anthology of films have been dubbed: “love letters to black resilience and triumph in London’s West Indian community”.

Small Axe was nominated for both Best Limited Series or Motion Picture Made for Television and Best Supporting Actor for Red, White and Blue for John Boyega. We are beyond elated that three of our clients took roles in this ground-breaking filmic sensation and share in the outpourings of love it has received.

Congratulations to Xavien, Jaden and Nathan, who all trained at the Anna Fiorentini Theatre & Film School and are all now repped by their agency, the Fiorentini Mosson Agency.

If you would like to follow in their footsteps and train at a London acting school, take a look at our upcoming intake for later in the year.

Onto yet more good news now and another client and former student of Anna Fiorentini Theatre and Film School, Mia Lakha landed the stellar role of ‘Tai’ in BBC’s Chuggington. The uber-hit, Chuggington is available on BBC iPlayer and Netflix and is a computer-animated television series produced by Ludorum plc. This bright and bold world follows ‘Tales from the Rails’ as we follow some larger-than-life character on their wacky and hilarious adventures. We are delighted Mia secured the role in series 6 of this family favourite. Well done, Mia – we are so proud of you!

You can hear and watch Mia as ‘Tai’ in her perfect purple action here!

Mia has previously played Annie in the UK tour of Annie and was Original West End Cast of The Prince of Egypt (which was also a Grammy-nominated cast recording!).

If you would like to follow in Mia’s footsteps, take a look at our upcoming intake for later in the year.