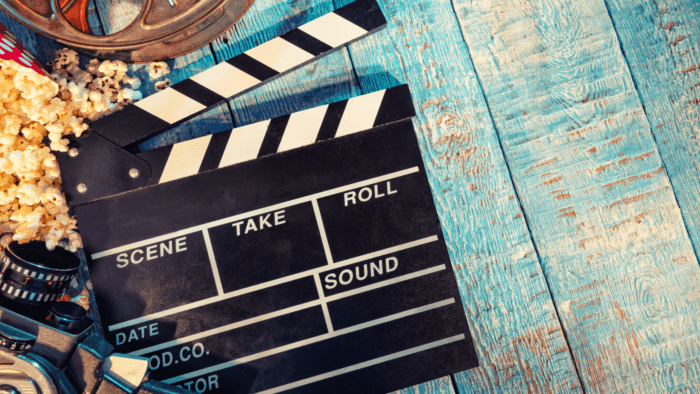 Almost as long as there’s been a moving picture, there have been filmmakers who wanted to take it as their subject. The film industry can often be a joyous but crazy world, so it seems only natural that it has inspired so many compelling stories.

Check out our other blog: Five Differences between Stage and Screen Acting

From new films to some golden classics, here are our top choices for feature films about Film:

This fun and joyous musical is a must for people who love movies. Largely ignored by critics at the time, the film has gone on to become a staple of Classic Hollywood. Set in the time when Hollywood was making the transition from silent films to ‘talkies’, the film follows the popular silent-acting duo Don (Gene Kelly) and Lina (Jean Hagen) as they adapt to the new system. Whilst he finds he has a voice for musicals, his vapid leading lady does not. A chance meeting with young singer Kathy (Debbie Reynolds), a woman who lacks the stardom of Lina but possesses the beautiful voice of which she needs, leads to Don coming up with a solution to salvage their careers. It’s got laughs, it’s got romance and it’s got iconic musical numbers – what more could you want?

Set in Los Angeles, this modern musical tracks Sebastian (Ryan Gosling) and Mia (Emma Stone) as they fall in love whilst pursuing their dreams of acting and playing jazz music. This film garnered much critical acclaim and received a record-tying fourteen nominations at the Academy Awards. Director Damien Chazelle said he wanted “to take the old musical but ground it in real life where things don’t always exactly work out”. It’s a charming nostalgic film with breath-taking scenes that pay homage to the Classical Hollywood musical.

Often ranked among the greatest movies ever made, Sunset Boulevard is a masterpiece film about Hollywood and the film industry. It even features cameos from many film legends such as Buster Keaton and Cecil B. Demille. Director Billy Wilder’s combination of noir, black comedy, and satire is fantastically entertaining. Gloria Swanson is magnetic as the aging silent film star Norma Desmond. Refusing to accept that her stardom has ended, she hires a young screenwriter (William Holden) to help set up her movie comeback. The screenwriter believes he can manipulate her, but he soon finds out he is wrong. This is a brilliant study of Hollywood and shouldn’t be missed – Mr. DeMille, we’re ready for our close-up!

Quentin Tarantino’s love letter to Hollywood, this film depicts the life of a fading television actor Rick Dalton (Leonardo DiCaprio) and his stunt-double (Brad Pitt) struggling to find success in late ’60s Hollywood. Filled with Tarantino classics like quirky characters and scenes of violence, the film reflects on the state of mind of the people in and around the industry of the time. Weaving together fact and fiction, it is a celebration of filmmaking and one to watch.

A tribute to a by-gone age of cinema, this French film copies the style of the black and white silent films that populated the screens of the early 1920s and 1930s. Taking place in Hollywood, the film shows a relationship between a young rising star and an older silent film star as the film industry goes through a huge transition. The film received widespread critical acclaim and won many awards including an Oscar for Best Picture. It’s a gorgeously captured film and is sure to make you feel uplifted.

I’m just a blog standing in front of a reader asking them to love this film. Okay, this classic rom-com may not be totally about film, but it does follow the life of simple bookshop owner William (Hugh Grant) as he meets the most famous film star in the world (Julia Roberts). Director Richard Curtis knows how to make the perfect romantic film and this proves to be a  funny and emotional watch, whilst also offering a great commentary on ‘celebrity’.

We hope this list has inspired you to watch a film about film or maybe it’s inspired you to act in film? Take a look at our Acting for TV/Film Course we only have a few places left for this term!