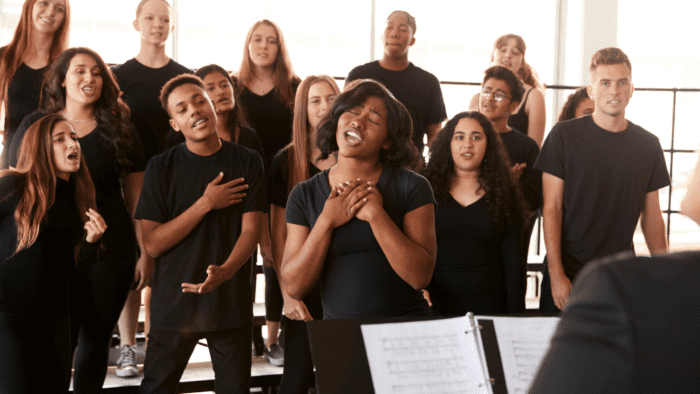 Films about ordinary folk getting together with a bunch of other people from different backgrounds to create a harmonious choir have long been popular. Audiences love to see the transformative nature of a choir and how the power of song can have a positive impact on groups of people. (It’s no surprise that some of the films in our list have had multiple sequels and adaptations!)

From films inspired by real life to some fictional classics, here are our top choices for feature films about Choirs:

When college student Beca arrives at a new school, she finds herself joining an all-girls a cappella singing group who are looking to refocus. As an aspiring DJ, Beca takes it upon herself to help the group find their new look and sound. Taking the group out of their comfort zone of traditional arrangements, the group begin to find success.  This funny film is packed with great musical and feel-good moments.

When a lively lounge singer played by Whoopi Goldberg sees her mobster boyfriend commit murder, she is relocated for her protection in Covent. Disguised as a nun, she proceeds to upend the quiet lives of the resident sisters. In an effort to keep her out of trouble, she begrudgingly takes on the role of organising the convent’s choir, an ensemble that she soon turns into a vibrant and soulful act. It’s full of fun entertaining moments and Goldberg is a treat to watch!

Based on a true story, Fisherman’s Friends follows a snobby London music executive who attempts to sign a Cornish fisher-folk group. But the Cornish villagers aren’t impressed by London music people or their money. With elements of comedy and romance, this is a feel-good movie that is worth a watch.

This heart-warming story is based on the real life story of the Von Trapp Family, one of the world’s best-known concert groups in the era immediately preceding World War II. The rebellious Maria, played wonderfully by Julie Andrews, becomes a governess in the home of a widowed naval captain with seven children, and brings a new love of life and music into the family home. Filled with so many classic songs and moments, this is a must see!

Set in 1949, this French film follows a new teacher arriving at a boarding school for troubled boys. Inspired by a true story, the middle-aged teacher, who himself has had a series of failed endeavours, works to transform the students’ lives through the power of song. It’s an inspirational and uplifting film!

As their loved ones serve in Afghanistan, women from different backgrounds come together to form the very first military wives choir. As they help each other through some of life’s most difficult moments, they also find themselves at the centre of a media sensation and global movement. This moving film is inspired by the true story of the Military Wives Choirs, a network of 75 choirs in British military bases across the United Kingdom and overseas.

We hope this list has inspired you to watch a film about choir or maybe it’s inspired you to start singing?  Due to popular demand, our City Singers course is back. It’s great way to let go of all the stress from your working day, develop your singing and performance skills and form new friendships. It will provide a combination of technical knowledge about the mechanics of your voice and also be a weekly sing song that spans many genres. There will even been some opportunities to perform including in our Charity Showcase on Saturday 4th December. Click here to find out how to submit an audition now!