The Tale of Pantomime: Where It All Began 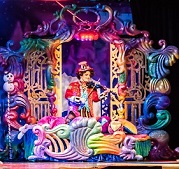 If I had to sum up British theatre in two words, it would be Shakespeare and pantomime. Going on a Christmas outing to the panto is a tradition in many families, and lots of people are introduced to the wonderful world of theatre this way. The funny thing is that pantomime comes from some very un-British customs, and that it originally had nothing to do with Christmas at all.

While the panto today might (usually) be harmless family entertainment, its origins lie partly in the Roman Saturnalia celebrations, which were a rather more adult affair. One of the key features of the holiday was the turning upside down of the social order, with poor people acting like the rich and men dressing as women. The modern panto still often sees women dressed as men to take the leading role, while men go all out in dresses and wigs in the role of the pantomime dame.

Meanwhile, many of panto’s stock characters and familiar storylines find their roots in the Italian commedia dell’arte, which was a form of improvised theatre that existed in the renaissance. Some of the recurring characters in the commedia dell’arte that we still see in pantomime today are the young lovers, who have to overcome some obstacle before they can be together, and the clever servant who always outsmarts his rich master. Commedia stories are about seeing the underdog win the day, a tradition the panto has inherited.

Gradually, panto makers also began to add other well-known storylines into the mix, borrowing elements from fairy and folk tales, as well as the Arabian Nights stories. With these additions, animal characters became popular too. These days we’re used to seeing cats, dogs and cows take the stage, but back in the day you’d also have more unusual species such as oysters or flying fish. Some actors would even specialise in playing animal roles.

The Victorian music hall, a kind of variety entertainment featuring songs, comedy and speciality acts, introduced a couple of other now staple pantomime ingredients. In an early version of celebrity casting, popular music hall stars would be given major roles in panto in order to draw in the crowds. They would sometimes even change the plot of the show so that they could fit in their own routines and jokes. Audience interaction was an important part of music hall entertainment, as was the practice of fitting in references to current events, so both these features came to panto with the arrival of music hall performers.

But none of that explains where the association between panto and Christmas comes from. This tradition actually began around the middle of the 18th century, when some theatre managers were concerned about the growing popularity of panto, which they saw as an attack on British high art. David Garrick, the manager of Theatre Royal Drury Lane, was one of the people who wasn’t a fan of the pantomime. As these shows were big spectacles, they were expensive as well, so Garrick decided to kill two birds with one stone and only stage one a year. And, you’ve guessed it, that one time a year was the Christmas period. Other theatres took a leaf from Garrick’s book, and soon the pantomime became the Christmas tradition we know today.