The Effects of Bullying and How Theatre Can Help 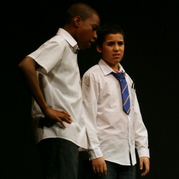 Over 3.2 million students are bullied every year. About 160,000 teens skip school every day because of bullying, 16,000 in the UK alone. These numbers are absolutely insane. Imagine being in the shoes of these children and teens. They feel so terrified to have to face someone who has been bullying them, so they decide not to face them at all, which can then lead to anxiety, stress, depression, loneliness and even worse. The bullied person is very much suffering as it is taking away from their education. In this blog post, I will be discussing bullying and what we can do to stop it.

Bullying can be defined as the “use of superior strength or influence to intimidate someone, typically to force them to do something.” The effects this has on an individual is terrible. They are scared to be who they are in case they may be bullied. These children feel that they are unable to express themselves which can lead to mental problems. They may become depressed. Dr. Andre Sourander found that children bullied early in life have an increased risk of depressive disorders and need psychiatric treatment later in life (Alexander & Krans, 2016). These bullied children may then struggle to form social relationships and even hold down a job later in life. This is a pretty detrimental effect of being bullied. I think one of the worst feelings is feeling alone. This is a feeling that many bullied children face. They think they are alone in this matter and will rarely speak out about it. Only 20-30 % of children tell an adult (U.S. Department of Health and Human Services). It is important to support children who are being bullied and do something about it.

If a child decides to stay home because of the bullying, they are missing out on their education. Even if they do decide to go to school, they are not fully paying attention to their lessons, as their mind is elsewhere (Patchin, 2017). This is because the bullied child is thinking about not feeling safe and when will be the next time they are going to be bullied. This is so terrible that thousands of children everyday go through this. This is the reason some may be unable to acquire a job later in life because they were not fully attentive in school. Even just one bully can affect a child for the rest of their life. Bullying must be combatted. There are various things we can do to help those who have bullied and to stop bullying.

There are various things we can do to be more educated on bullying and the effects on children. Through theatre one can learn what both sides, the bully and the bullied, looks like. It allows the actors to experience different perspectives while playing different characters. This is the importance of theatre. Being casted as a character that is bullied will allow the actor to feel the emotions an actual bullied person may feel. If the actor was once a bully, playing the bullied child may change the actor’s ways. Seeing shows also can elicit emotions from the audience. The audience can take away a message from the show that could change the way they choose to live for the better. Theatre can be quite powerful.

Bullying is a big problem in our society today. It is up it us to combat it. We can speak up for ourselves and others. We can become aware of our actions and words. We can help build each other up by building our self-esteem. The Fiorentini Foundation is helping in the fight against bullying. The foundation has won a grant from the Big Lottery and National Lottery, which will go towards funding anti-bullying workshops in various schools. These workshops will be so beneficial in building confidence and pride. This is very exciting and one step closer to ending bullying.