The cure to a broken heart? A touch of musical theatre 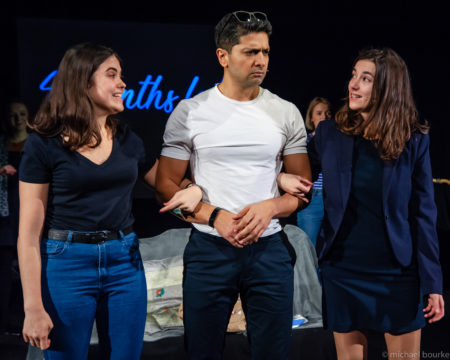 Mad, Crazy, Love follows the story of bachelor Jack and his attempts to find ‘the one’ amongst dating apps, speed-dating, and casual encounters. With a musical score including songs by Sam Smith, Bill Withers, Eternal, and more, the weekend showings were a homage to the difficulties of dating in the 21st century. As an original piece, Mann worked with her cast to develop the roles and music around the performers to highlight their strengths and develop their abilities. Mann is an experienced West End and television professional, who has recently returned from the international tour of School of Rock. Her other notable features include the stage production of Bend it like Beckham, and backing-vocalist for ITV’s X-Factor and Britain’s Got Talent.

Mann commented; “I’m thrilled with the success of Mad, Crazy, Love – it’s been a stressful and challenging process writing and directing my show in such a short amount of time. However with the hard work and commitment from the cast, and Stage & the City team, we pulled it off! Putting on a show from scratch shouldn’t be underestimated – but the magic of theatre proves miracles exist!”

Stage & the City is a central London performing arts school for “adults who just want to have fun” – offering acting, singing, dancing, film, and musical theatre classes in the evenings. Participating students range in expertise and employment, from lawyers to lawn-mowers.

Frances James, who played the leading love interest Claire in Mad, Crazy, Love, works as a content writer and researcher for a Higher Education company, but spends her Thursday evenings in the musical theatre studio. She describes her experiences since joining Stage & the City; “The performing arts has forced me to challenge myself in a variety of ways. The fact that I sing on my own in front of others is a big achievement (even if it’s not perfect), as it was completely unheard of prior to joining this group.”

Finance and export-manager Davinia Powell played one of the lead vocalists in the show, and describes her favourite part of Stage & the City; “The members of the company. We all click and have become such a team, I for one know I have made friends for life.”

After the final show on Saturday evening, the cast were teary-eyed at saying goodbye to the long-anticipated showing of Mad, Crazy Love – however it’s safe to say that all twelve will be joining again in the New Year.

Should you wish to try something creative and exciting, why not join Stage & the City this January! Regardless of background or skill set, the sessions are catered to everybody, ranging from 6, 8, and 12-week courses. All of the teaching staff are industry and West End professionals, so consider taking the creative challenge for 2020! Early Bird discounts are available until the 15th of December.