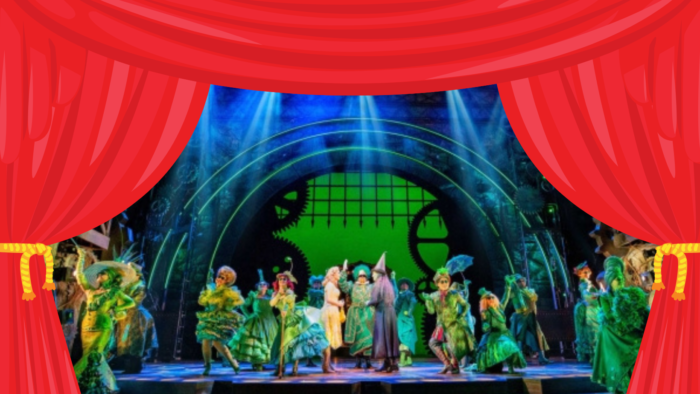 Welcome to our new series of blogs called Stagey Selects where we will take a deep dive into our favourite musicals and shows from the stage. We’ll take a look at the history of the show as well some fun trivia. This week is all about Wicked.

Based in the iconic world of Oz by L. Frank Baum, the musical follows Elphaba who has always found herself to be a bit different from the rest (especially with her green skin!) When she joins college, she befriends Glinda and they embark on a journey to meet the Wizard of Oz. What follows is the decisions and events that shape the destinies of two unlikely university friends on their way to becoming The Good and the Wicked Witch of the West.

With music and lyrics by legendary composer Stephen Schwartz, Wicked began Broadway performances at the Gershwin Theatre in 2003. Performances of the hit musical have continued there ever since. After three years in New York, it transferred to London’s West End, arriving at the Apollo Victoria Theatre in 2006. And just like the Broadway production, Wicked has only run at one theatre in London.

Check out our other blog: Stagey Selects: Matilda the Musical

Wicked is inspired by Gregory Maguire’s 1995 novel Wicked: The Life and Times of the Wicked Witch of the West.

International productions of Wicked have opened in Australia, Brazil, Germany, Japan, Korea, Mexico and The Netherlands.

The hit musical has received many awards across the globe and was nominated for 4 Olivier Awards when it opened in London.

Idina Menzel is perhaps the most famous portrayal of Elphaba as she played the role both in the original Broadway cast and the original West End cast.

The production requires a lot of power per performance and uses enough electricity per show to power 12 homes.

The song ‘Defying Gravity’ has been played in space and was used to wake up astronauts aboard space shuttle mission STS-131 in 2010.
Wicked is being adapted into a film with Ariana Grande and Cynthia Erivo being cast as Glinda and Elphaba.

We’re clicking our heels together and saying ‘There’s no place like the Apollo Victoria Theatre’!’

So if you love your musical theatre and the performing arts, we offer a range of weekend and after-school classes where this passion is nurtured and encouraged. We have some taster days lined up for each of our branches next year.  Click here to find out more.