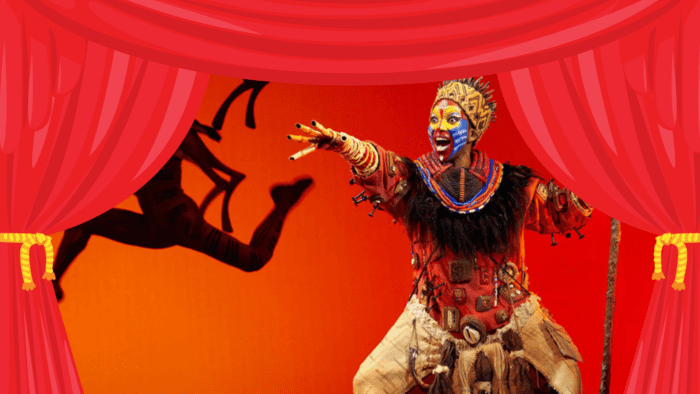 Welcome to our series of blogs called Stagey Selects where we will take a deep dive into our favourite musicals and shows from the stage. We’ll take a look at the history of the show as well as some fun trivia. This week is all about The Lion King musical.

Based on the 1994 Disney animated movie of the same name, The Lion King follows the moving and epic story of Simba as he transforms from a naïve lion cub to his destined role as King of the Pridelands. But trouble ensues when Simba’s uncle Scar launches his own bid for the Kingdom, going to unimaginable and shocking lengths to claw his way to the throne.

The production opened on Broadway at the New Amsterdam Theater in November 1997. Following its success there, the show opened in the West End at the Lyceum Theatre in October 1999.

Check out our other blog: Stagey Selects: Charlie and the Chocolate Factory – The Musical

It has been running at London’s Lyceum Theatre for over 20 years making it the sixth-longest running show in the West End.

The story was influenced by the Biblical stories of Joseph and Moses and William Shakespeare’s Hamlet.

232 puppets are used in one performance of the show. The giraffe puppets measure18 feet and the elephants are 13 feet.

The music is by one of Britain’s most popular musicians of all time, Elton John. The lyrics are by Tim Rice whose other credits include Evita and Joseph and the Amazing Technicolor Dreamcoat.

There are six African languages used in the show. These are Swahili, Zulu, Xhosa, Sotho, Tswana and Congolese.

The musical has won many awards including Best Musical at the Tony Awards and Best Costume Design at the Olivier Awards.

The production has played in over 100 cities in 20 countries on every continent except Antarctica.

The actor George Asprey has been playing Scar since April 2008.

We can’t wait to return to the Pridelands and hear the audiences roar!

So if you love your musical theatre and the performing arts, we offer a range of weekend and after-school classes where this passion is nurtured and encouraged. Click here to find out more. And if you join us for the next term at the Hackney, Docklands or Greenwich branches, you’ll have the opportunity to perform in one of our spectacular Showcases!

And we are also running a Musical Theatre Summer School next week and at the end of August. It’s not too late to book your place – click here to book now.