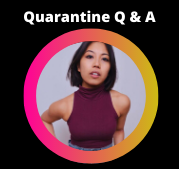 This week Anna Fiorentini students were lucky enough to speak with actor, dancer and choreographer Alexzandra Sarmiento, who kicked off the first of our lockdown industry Q&As. A member of the original London cast of Hamilton, Alexzandra told us all about performing in the smash hit show, travelling the country at 4am to make auditions, overcoming stage fright, and what happens when cast members forget their lines!

Having trained at the acclaimed Fiorello H. LaGuardia High School of Music & Art and Performing Arts in NYC (where the film and musical Fame is set!), Alexzandra planned on becoming a concert dancer with dreams of performing at The Joyce Theater in New York (the equivalent of London’s Sadler’s Wells). However, she realised her passion for musical theatre after landing a role in an international tour of A Chorus Line. She has since gone on to star in numerous Broadway and West End shows and still finds time to hone her skills, such as accents and vocal technique, whenever she can.

Every performer will spend a lot of time auditioning, not to mention travelling around the country – and even the continent – to get to them. The audition process for Hamilton, Alexzandra tells us, started in autumn 2016 before opening nearly a year later, whilst auditions for principal roles started back in 2015, a whole two years before the show opened! Alexzandra, who was performing in a production at the West Yorkshire Playhouse in Leeds at the time, had to wake up at 4am to travel to London for multiple recalls, before heading back up North to perform that evening’s show. Talk about exhausting! ‘However,’ she says, ‘every stage of the process was really fun; you get to learn new material and be introduced to different creative teams.’

As dance captain, Alexzandra takes responsibility for teaching routines, which take months to learn, as well as performing them. Hamilton’s innovative fusion of musical theatre and rap means performers can be required to sing around twenty-five words in the space of a bar. ‘In musical theatre, good choreography is the lens of focus for the story that’s being told; what’s brilliant about the choreography in Hamilton is that it highlights the storytelling behind the rap.’

Every performer’s biggest fear is something going wrong on stage. But what does a trained professional do when that inevitably happens? ‘It’s the performer’s job,’ says Alexzandra, ‘not to interrupt the audience’s experience by drawing attention to their mistake. The difference between people who have trained for a long time and those who haven’t, is how they pick themselves up when they fall down.’ Alexzandra didn’t mean when people literally fall over, but having seen the choreography involved in Hamilton, we’re surprised she didn’t!

Almost every performer will be familiar with the nail-biting nerves of waiting in the wings before stepping on stage, and Alexzandra is no different. Her first solo vocal performance came on her twenty-first birthday whilst understudying the role of Mabel in Fame – The Musical at the huge Liverpool Empire, an experience she says was both exciting and terrifying: ‘sometimes you’ve just got to throw yourself in the deep end – if you never put yourself in those situations, however scary they may feel, you’ll never know how good it’s going to be.’