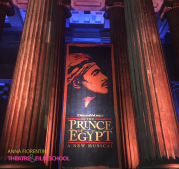 Last night we had the pleasure of supporting our client Mia at the opening night performance of The Prince of Egypt. The production has transferred from Broadway to the West End and it is a spectacle. It is the stage adaptation of the Dreamworks animation of the same name and does not disappoint. Some songs we all recognise as well as brand new tracks for the stage show.

The performance was followed by a party at the British Museum which was the perfect setting to celebrate this production.

Mia joins the cast after playing the title role of Annie in the UK tour in 2019.

Congratulations to all involved in The Prince of Egypt, this is something to be very proud of. Currently playing at the Dominion Theatre until October 2020.