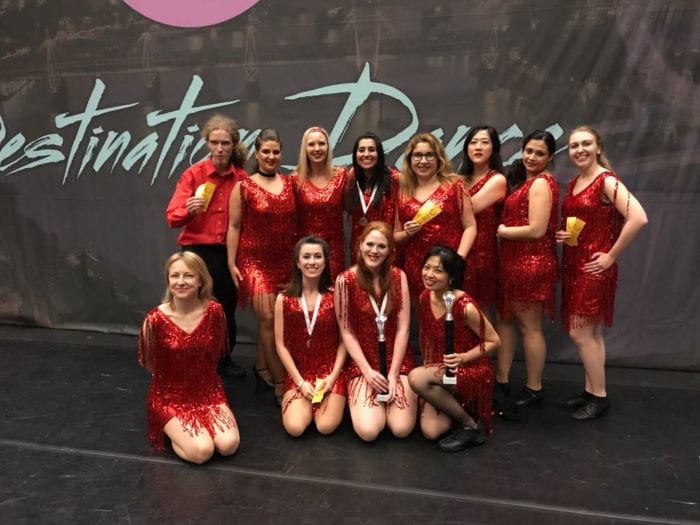 Destination Dance is a dance competition which was founded by dancer Mandy Montanez, where dance schools from all over the UK can compete for trophies and various other prizes. The competition is originally from America and has entrants from all across Europe. The event is split up into a total 6 categories, including jazz, hip-hop, lyrical, contemporary, musical theatre and ballet.

This year, on Friday 27th of October, our Dance Company students competed in the London competition at York Hall in Bethnal Green, in front of a panel of judges. Judges included Lady Venus who has performed with artists such as Madonna, Black Eyed Peas, Whitney Houston and the Spice Girls. The other judges were from the successful dance show So You Think You Can Dance.

They performed a total of 3 dance routines to songs including Ghost by Michael Jackson and Proud Mary by Tina Turner. When our students were on stage, the audience went wild and the judges were really impressed. All of our students hard-work and dedication had finally paid off! They won 3 1st place gold trophies for the categories that they were entered in, as well as 1st place gold ribbons for each participant, which is such an incredible achievement.

“I try to pull away from the conventional expectations of dance competition techniques and give them a routine that’s interesting, well costumed and that the audience can relate to,” says our dance teacher Mark Short, “this gives the audience and judges a break from watching the same styles over and over again. And it lets them enjoy routines with music that they are familiar with. They love to clap and sing along whilst our students perform, it’s great!”

Our Dance Company also entered the competition in 2015 and 2016 and won 1st place prizes. So there’s no doubt that they’ll be returning to Destination Dance next year! Although it’s great that our students can compete and win, performing in front of an audience and judges really help our students to become more confident performers, which helps them to become more confident in their everyday lives.