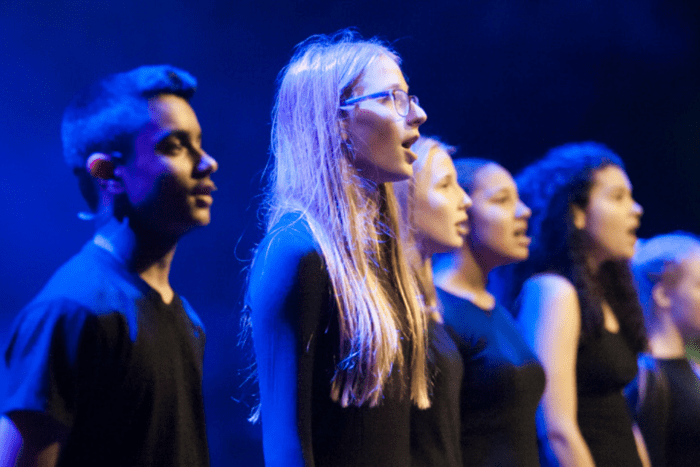 Shortly before Christmas 2018, the season of giving and goodwill, Fiorentini Foundation board member Oscar Kugblenu donated £3,900 to the school’s charity, which enables talented young people to attend classes at the school through bursaries and scholarships.

Oscar, a freelance Audio Producer, decided to reallocate money, £3,900, which was originally put aside to cover his fee and associated expenses on a charity project he was working on.

As he would usually do work for charity projects free of charge, he decided to put the money towards the school instead.

The donation came as a huge surprise to committee members last year, and we are all extremely grateful to Oscar for his generosity, kindness and sincere respect for the work the charity does in supporting students who may not otherwise be able to attend the school and benefit from all it has to offer.

One such student whose life has been, in no exaggerated terms, transformed by the school, is fellow board member Zoe Sadler, who attended the school from 2003 to 2014, in part on a scholarship. As a shy and anxious child lacking in confidence, taking part in drama, dance and singing classes encouraged her to express herself, build her self-esteem and take part in something that allowed her to slowly overcome her anxiety.

As a not for profit organisation, the school is largely dependent on the generosity of donors and sponsors, which, at a time of arts funding cuts, are increasingly hard to come by. This is why we are so grateful to Oscar, and everybody else who has invested in fostering young talent through the school over the years.

Oscar, who has been a board member for just over a year, says “I’ve known Anna for about 6 years now, and during that time I have learnt more and more about her, the Foundation, and the invaluable work it does, not only in terms of providing Performing Arts courses for students, who would otherwise be denied due to a lack of access, but also the amazing additional work the foundation does, such as Anti-Bullying workshops, and supporting children with or affected by cancer.

“An appalling side effect of the current economic system is the disproportionate negative effect it’s having on young people and youth support services. This, in turn, is just one of many other reasons for a rise in the isolated and disenfranchised-feeling a lot of young people, particularly those from a poorer background are experiencing. The amazing efforts of Anna and the Fiorentini Foundation aim to re-dress this imbalance and give young people confidence, life skills, and a future career in the arts they’d never have thought possible.

“What I particularly love about this charity is that it’s absolutely hand on no money is wasted, all profits are ploughed back into supporting students, and the legacy that it’s developing, with the success of past students like Belinda Owusu (Libby Fox in Eastenders), Jaden Oshenye (The Bodyguard), Harry Demmon (Swimming With Men), and of course Jermain Jackman (winner of The Voice), to name just a few, goes to show the great positive impact it’s having, not only on young people but on the arts itself, in unearthing new and exciting talent.

“So when, in early 2018, Anna asked if I’d like to become a member of the board of trustees, I didn’t hesitate to say yes. Those who know me will know I am very much a ‘put your money where your mouth is’ type of person, so when I was looking over budgets I had put aside to cover personal/ charity projects, it was clear how I could put this money to better use. I am excitedly looking forward to the years ahead, of getting more involved with the Fiorentini Foundation, and using my skills, experience and everything else to hand, to help spread the word about the incredible work this charity does.”