“Mummy, I’m an Actor”; inclusivity in the Arts 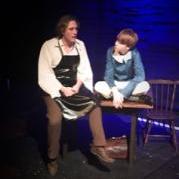 Here at the Anna Fiorentini Theatre & Film School, we’re extremely lucky to work with a diverse group of children from all walks of life and it is just that, which creates our very own ‘Theatre Company’.

Side by side, our students work together most of the time not even aware of the challenges that their peers may be facing. They are equals, working for a shared goal. Not only does this instil self-esteem it also provides many children with life skills that they may not otherwise have the opportunities to explore.

Four years ago, we were lucky enough to be introduced to Charles, a then 9-year-old boy who had been turned away from a number of other drama schools as he was diagnosed with Aspergers Syndrome a high functioning Autistic Spectrum Disorder. We have always been proud to be an inclusive school and want to give children the opportunity to grow and develop through the performing arts. We offered Charles a taster day along with our other new students and have never looked back since. Charles is a creative, talented and dedicated performer and is certainly not defined by his condition.

After attending Anna Fiorentini for a number of years, Charles gained the confidence to audition for a role in an otherwise, all adult cast of Frankenstein with the Tower Theatre Company. The Company’s first-time director Karen saw something special in Charles and his approach to the character fascinated her, so she offered him the role of William Frankenstein, Victor Frankenstein’s younger brother. They gave him an opportunity that many other theatre directors would never have even considered.

Karen’s confidence in Charles’s abilities were proven right as he took on the role of William with great enthusiasm and professionalism. As great acclaim was received by various reviews; ‘Victor’s madness is only halted by a dream meeting with his little brother with [Charles] radiating the purity and innocence that is sorely lacking in the Creator’s mind’.

Charles worked alongside his fellow adult actors, none of them aware of the challenges he was facing beyond the first-night nerves they all shared. Charles was given the space, time and respect to explore his character. This safe and supportive environment allowed him to perform every night to a packed out (paying) auditorium at the Theatro Technis in Camden and in turn gaining invaluable experience in what would be a very rare opportunity for any child actor. He declared “Mummy, I’m an actor” and that is exactly what he was. He was not described or restrained by a word or condition.

Charles is also an active member of the Anna Fiorentini Agency, through which he worked on London Calling Plus funded short film, We Love Moses as well as working on other theatre and film productions.

The professional acting industry is not always known for its flexibility or patience due to pressured deadlines, however, by finding and giving that time and space to autistic actors, it can allow them to explore a role and even find new depths and characteristics that would not always be found by a neurotypical equivalent actor.

We’re beyond excited to see what challenge conquers next and know that Charles’s experiences with us, on and off stage, will support his development and growth and help to equip him for the opportunities ahead.