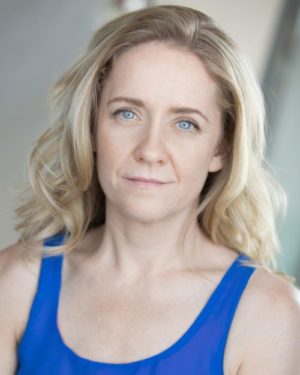 We want to give a warm welcome to our new Acting for TV and Film instructor, Emma Keele! Emma has extensive experience on the stage (Curious Incident, National Theatre tour and Phaedra’s Love, Arcola Theatre) and on the screen (Emmerdale, Downton Abbey, Coronation Street) and was kind enough to give us a small peek into her experiences as a professional performer.

How did you get into the performing arts?

It’s something I’ve always enjoyed. Growing up, I was taking dance classes most nights after school and I was always involved in school drama productions. I was also lucky that my parents took me to the theatre a lot as a child, which really gave me the bug. The natural progression for me was to study English and Drama at university and then go to drama school. I never wanted to do anything else.

What has been your greatest accomplishment professionally?

I was thrilled to be cast in the National Theatre’s production of ‘The Curious Incident of the Dog in the Night-time’. I had seen the show a couple of times both at the National and in the West End and loved it. It’s rare to love a show as an audience member and then get the opportunity to be in it! I was also in the international touring production which meant I got to spend four months touring China and Australia, which was a real treat. The opportunity to travel is one of my favourite things about the job.

What have been some of the key challenges you have faced as a performer/in the industry?

Nobody can prepare you for how difficult the gaps in employment can be. My expectation whilst at drama school was that there would be lots of opportunities to audition, but I had to develop a thick skin about those auditions not always going my way. The reality is that sometimes there can be gaps without even any auditions and it can be tough to stay positive.

What do you think the key differences are performing on camera vs on stage?

Essentially it’s the same thing – you are still embodying a character and portraying a life, but the techniques for sharing the story are different. In theatre you have to use physical and vocal skills to fill the space and communicate your performance to the back of the auditorium. Screen is obviously more intimate, so you bring your performance right down. You can think a thought and the camera will see it in your eyes.

Any words of advice for someone considering getting into acting, but is uncertain?

It’s a lifestyle rather than a career choice! When you are on a job it is all-consuming and when you are between jobs, your time will be filled with the hustle for the next job, whilst doing various day jobs to pay the bills. Be sure that there is no other career with more stability that will make you happy. Then if and when you’ve made the decision to do it, go for it, because it’s the best job in the world!

Emma Keele will be leading our new Acting for TV and Film courses starting this February 2020! Don’t miss out and book before it fills up – details here.