Learn the Lingo: Get to know your Theatre Terms 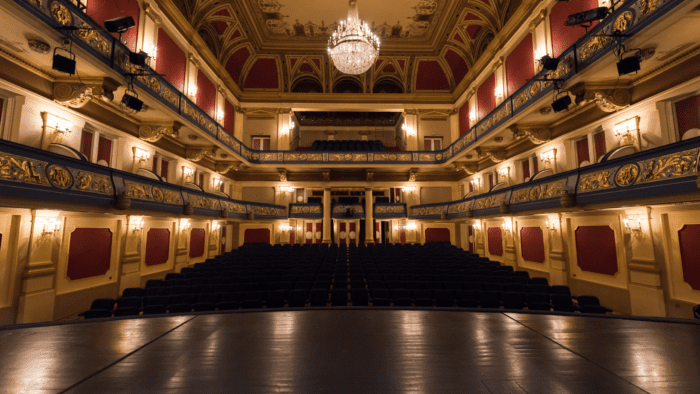 Are you wanting to get into theatre but you’re struggling to grasp all the theatre terms? If you’re new to theatre it may be rather daunting as there are so many terms that are used in the industry. It is useful to know them no matter the experience level. So here is our guide for you to learn the lingo.

Check out our other blog: The play’s the thing: Our Five Favourite Plays

Ad Lib – Deriving from the Latin phrase ‘Ad libitum’, ad-libbing is used in acting to describe individual moments during live theatre when an actor speaks through their character using words not found in the play’s text.

Am Dram – This is short for amateur dramatics meaning non-professional theatre.

Audition – This is like an interview for a performer to show off their talents and for creatives to see if the performer is suited to the role.

Blocking – Blocking is the positioning of  actors and performers on stage in order to facilitate the performance.

Book – This is a copy of the script, kept by the Stage Manager, which includes all cues (qv) and notes. Actors are ‘on book’ during rehearsal prior to having all lines memorised.

“Break a Leg” – This phrase is often used to wish a performer ‘good luck’ before they go on stage to perform. It is believed to have come from a superstition that wishing a person ‘good luck’ would actually be bad luck, so by wishing someone bad luck, the opposite will occur.

Call Time – This is the time the cast and crew of a production needs to show up for rehearsal or performance.

Centre stage – The middle of the stage.

Choreography – Sequences of movements and steps done by performers.

Cues – This is a call for an action to be carried out at a specific time.

Curtain call – The end of the show often when the performers take their bow.

Dark – When a venue has been closed to the public. Some theatres go dark temporarily during production periods or when the next show is being prepared.

Downstage – The front of the stage nearest the auditorium.

Dress run – A rehearsal where the full production is performed in costume.

Ensemble – A group of performers who play background roles and appear in multiple scenes. This term can also be used to refer to an entire theatre company.

Fight Call – This is a scheduled meeting during which actors practice stage combat if there is any kind of physical altercation in the production. It’s to make sure everyone is comfortable and safe.

Flys – The rigging system made up of ropes and pulleys that enables the stage crew to quickly move large pieces of scenery.

Fourth wall – A convention in which an invisible, imagined wall separates performers from the audience. While the audience can see through this ‘wall’, the actors act as if they cannot.

House – The auditorium space, so you’ll hear the phrase “the house is open” when the auditorium is free to enter.

House lights – The lights in the auditorium.

Improv – This is short for improvisation where an actor comes up with lines on the spot without a run-through.

In the round – When the audience sit on every side of the stage.

Iron – This is the safety curtain used to separate the stage from the audience.

Matinee – A performance of a show that takes place in the afternoon.

Monologue – A speech by only one actor.

Press night – The opening night of the show which invites members of the press to review the show.

Previews – These are the performances that run in front of audiences before the official opening. They are used to make sure all issues are ironed out before press night when the critics review.

Prompter – This is someone who sits in the wings and will tell performers their lines if they forget them.

Script – This is the text of a play

Stage left – The left side of the stage for an actor who is standing facing the audience.

Stage right – The right side of the stage for an actor who is standing facing the audience.

Strike – The act of removing the set from the stage

Swing – A performer who understudies several chorus and/or dancing roles and can ‘swing on’ when someone is ill, injured, or missing the performance for any reason.

Tech Run – A rehearsal to practice the technical elements of the performance.

Top and tail – A rehearsal in which dialogue is reduced to technical cues, such as a lighting or sound change.

Understudy – Usually a member of the ensemble, this actor will be responsible for learning the part of a leading or supporting actor in order to be able to act at short notice in their absence.

Upstage – The back of the stage nearest the backdrop.

Wings – The sides of the stage that are ‘offstage’.

If this blog post has helped you and you’re ready to apply this new knowledge, take a look at our acting and musical theatre classes here. We offer Acting for Beginners classes on Mondays and Thursdays which aim to teach you the fundamentals of acting alongside improving your self-confidence and transferable life skills.