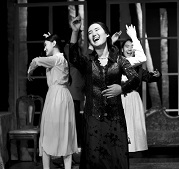 We recently took a look at some of the best known drama schools in London and what their specialties are. Although many of the UK’s top schools are in the capital, there are quite a few outside of London that are worth considering as well. Please join us for a trip around the country!

Probably the best drama school outside London is the Royal Conservatoire of Scotland, or RCS (not to be confused with the RSC, the Royal Shakespeare Company), which is based in Glasgow. Founded in 1847, this school has such a long and illustrious history it can even give LAMDA a run for their money. The Conservatoire includes three schools: the School of Music; the School of Drama, Dance, Production and Screen; and the Junior Conservatoire. There is a wide range of courses available: next to some more traditional ones such as Acting and Musical Theatre, the RCS also offers a BA Filmmaking and a BA Performance in British Sign Language and English, which is the only one of its kind in Europe. The Junior Conservatoire offers after school courses in five disciplines for 11 to 18 year olds, which gives them the best possible foundation before they start auditioning for drama schools.

The Royal Welsh College of Music and Drama started life at Cardiff Castle in 1949, but has since then (sadly) moved its own purpose-built accommodation. The majority of students here are on music-related courses, but there’s still a sizeable theatre community within the school. Undergraduate degrees offered here are Acting, Stage Management and Theatre Design, but there’s more variety in post-grad courses, including MAs in Arts Management and in Event and Stage Management. If you’re worried about being all the way out in Wales, you don’t have to be: Royal Welsh is known for having great industry contacts, so students have lots of opportunities to be seen by agents and other industry professionals. They even organise a performance week in London for their graduating acting students to make sure they get the best possible start to their careers.

Fancy studying at Oxford instead? Even in the world of theatre, Oxford offers highly respected but difficult-to-get-in-to courses. The Oxford School of Drama, however, is not related to the world famous university. In fact, it’s not even based in Oxford! Located in the small village of Woodstock, it’s the newest school on our list: it was established less than thirty years ago. It’s also the smallest school, accepting only 18 students on both its three year and one year acting courses, so you’ll be guaranteed plenty of personal attention here. Prospective students should note that courses at the school lead to a diploma rather than a Bachelor’s degree.
Last but not least is the Bristol Old Vic Theatre School, which was opened by Laurence Olivier in 1946. Like RADA and LAMDA, it’s part of the Conservatoire of Dance and Drama, although it’s even more selective than its London-based counterparts: only 14 new students are accepted onto the BA Acting each year. The school also offers a two-year Foundation course, stage management and costume design undergrad courses, and a number of MAs. These are small courses too, with most postgrad programmes only accepting four students each year. This personal approach clearly pays off: some of the best British actors have trained here, so getting a place will stand you in good stead with agents and casting directors.