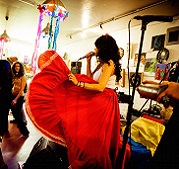 Welcome to a new series on the Anna Fiorentini blog, where we talk to theatre industry professionals to find out more about their jobs. Everyone knows what an actor does, but it takes a lot more than just the people on stage to make a show. Please join us as we quiz people in all sorts of cool theatre jobs on their work, what it involves, and how you could do the same. Our first point of call is Daniel Goldman, artistic director of CASA, London’s only Latin American theatre festival.

How do you become an artistic director?

The way I became an artistic director of two companies was by founding them. What’s harder is staying motivated in the role – it’s been ten years that I’ve been running CASA and there have been highs and lows. The key is enjoying the good times and getting through the bad times.

With only six weeks to go to the festival, I’m in the strange position of beginning to detach from this year’s festival and leaving the delivery of it to my brilliant team while I start thinking about next year and the future. If you’d asked me this question a couple of weeks ago, I would still have been programming the extra activities that make CASA a festival and not just a season of plays. By that I mean the work by UK artists, the workshops, the parties, the play reading festival we’re running, and lots more.

What are the best parts and the worst parts of your job?

The best bits are the people I get to work with. The Spanish word ‘casa’ means home in English and the best bits are when CASA really feels like a home to artists, audiences and participants. Seeing people watch the work and have a great time is a brilliant feeling. And finding that special company and giving them their first international break is also fantastic.
The worst parts of the job… are admin related. I’m not great at administration and I don’t like it very much. Also, disappointing people along the way. You can’t do everything for everyone, however hard you try.

What advice would you give to young people who are interested in going into your line of work?

Go for it. But know that running a festival is 80% admin, 20% creative fun, and that balance almost never changes. I know it now sounds like I don’t like 80% of the job, but take that with a pinch of salt…

CASA is the only festival in London specifically dedicated to Latin American theatre. Why do you think it’s important to showcase international theatre here in the UK?
Given what feels like our isolationist decision to leave Europe, and what’s going on in the US and much of Europe with the rise of nationalism, I don’t think there’s ever been a more important time to build bridges between cultures and countries and expose ourselves to new ideas and different cultures.

What role do you think a festival like CASA can play in diversifying theatre in the UK?

Honestly, probably a tiny one. We’re a small festival with a limited reach. But we’re here. And you’ve got to be present. We’re here and we’re building the bridge. And though our numbers are relatively small, the quality of the experience we offer is huge, and the artists we support are making great work, and the audiences have a great time. Thebes Land, a Uruguayan show that we presented in an English translation last year, received much critical acclaim, sold out at the Arcola’s main space, and won the Off-West End Award for Best Production. That shows that brilliant theatre from Latin America can enjoy great success here. And best of all, Thebes Land is coming back this year!

What do you hope theatre in London is going to be like in the future?

More different voices making work, and more international work, not just in London but all over the UK.