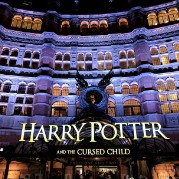 Growing up I never had the pleasure of going to see a West End production. It wasn’t until I was in my early 20s that I went to see my first musical. Since then I have caught the ‘stagey’ bug and I’m now a fully-fledged theatre fanatic. If your child hasn’t been introduced to the wonderful world of theatre yet, here are 6 family-friendly West End shows they’re guaranteed to love!

Andrew Lloyd Webber’s award-winning show School of Rock is a must-see for theatregoers. The show is lively, fun and will make you rock out like you’ve never rocked out before. This hilarious musical is based on the hit film and follows wannabe rockstar Dewey Finn on his quest to earn some extra cash working as a supply teacher. He discovers that his grade-A students are musically gifted and transforms them into head-banging rockers. What’s great about this show is that all of the band members play the instruments themselves! Totally awesome.

Another show to add to the list is Matilda The Musical. Inspired by one of Roald Dhal’s most loved books, a gifted 5-year-old who loves to read struggles to fit in with her oppressive family. Matilda meets a kind-hearted teacher called Miss Honey and develops a wonderful friendship, but is faced with more cruelty from her horrible headmistress. What makes this show stand out is how brilliant the kids are! They’re all extremely talented, and they make the show come alive. I think it’s great for children who attend drama school to see other children performing on stage. It can inspire them!

If you’re a Harry Potter fan this is a must-see show. The special effects are incredible and bring magic to the stage!  The play follows Harry Potter who now works for the Ministry of Magic and his son who is about to attend Hogwarts. It has won so many awards that it’s impossible to keep count. Not to mention, the tickets are in such high demand that it can feel like a never-ending battle to try and get tickets (unless you want to pay for the most expensive seats in the theatre). The struggle is real. If you want to get your hands on reasonably priced tickets to one of the West End’s most sought after plays, your best shot is to enter The Friday Forty.  Winners pay only £40 per person for Part One and Part Two!

Everybody is talking about Everbody’s Talking About Jamie. If you’re looking for a breath of fresh air in theatreland, look no further. This is a modern-day musical inspired by a true story about a teenage drag queen. The musical follows 16-year-old Jamie who struggles to fit in, but thanks to the support of his mother and friends, he learns to overcome prejudice. The show is all about following your dreams and being yourself, which is an important message for everyone!

If I could use one word to describe Wicked it would be SPECTACULAR.  This show probably has the best costumes and set (in my opinion) than any other show in the West End. It’s magical, fun and unforgettable. There’s a reason why it’s won over 100 major international awards! Wicked tells the story of two unlikely friends, Elphaba (the Wicked Witch of the West) and Galinda (the Good Witch), their friendship soon reaches a crossroads due to their opposing personalities.

Discover the story behind Motown records and get tickets to see this epic musical before it closes in April. This is probably one of my favourite musicals and I can’t recommend it enough! The show is about Berry Gordy who founded Motown records with just $800 that he borrowed from his family. It tells the story of how he launched the careers of stars such as Dianna Ross and the Supremes, Stevie Wonder, Marvin Gaye and The Temptations, whilst highlighting the struggles of black American music artists in the 50s and 60s.