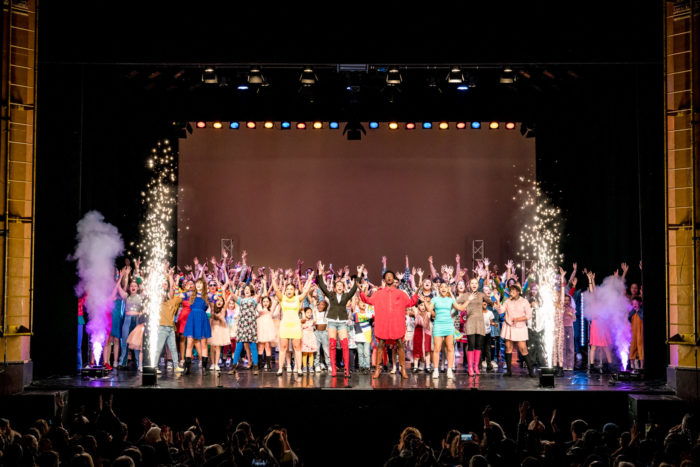 Students were joined on stage by special guests at the end of the show. This included alumni Tahj Miles, who is currently starring in BBC’s Death in Paradise, alumni and singer-songwriter Kali Claire, and esteemed actor and long-time supporter of the school Joseph Marcell, who starred at the Butler in The Fresh Prince of Bel-Air.

Meg Hillier, MP for Hackney South and Shoreditch, is a supporter of the School and was also in attendance. She said –


“It was great to see the Anna Fiorentini School on stage again after the pandemic. Our young people have been through so much over the last two years and getting back to real life and performance is a huge confidence booster.”

Alumni of the school were also present at the event through a special anniversary video. Past students were asked to send in a short video about their time at the school and how it impacted their lives, including Belinda Owusu, star of BBC’s Holby City and EastEnders, Orla Hill, known for Swallows and Amazons and Song for Marion, and Jermain Jackman, winner of The Voice UK 2014.

Watch the video below:

The event was a huge success and we couldn’t be prouder of our students. We’ve had a difficult couple of years not knowing if the school would have to close or if we would be able to do live performances again so to finally be able to celebrate 21 years has been really special. This re-launch has been a huge success and we want to thank all the students, teachers, volunteers and tech crew who made the event possible, alongside the audience members and community for once again getting behind our students and supporting their local children and young people.

Here are a couple of glowing reviews from the audience:

“A huge congratulations to the AF team for the amazing show on Saturday. Truly – out of this world. It must have taken a huge amount of effort and skill to bring those performances out of kids so discombobulated by the last couple of years, and amid the financial worry for you as an organisation too. You’d never have known any of that from the quality of the performances! Our child has had a tough couple of years but the school and the showcase has been a fabulous distraction for them. Thank you!” – Parent of a Student

“Congratulations for an absolutely spectacular show on Saturday night. We were blown away by the talent on stage and the variety of performances. My child had such a wonderful time, they have been looking forward to the show ever since the last one, and the stress of Covid over the last couple of years and the disappointment of postponements made it all the more special for us all!” – Parent of a Student

If you’d like performance opportunities like this showcase , then join us for our new term starts in April. Our Hackney, Docklands, Camden and Greenwich branches will be hosting obligation-free taster days for students aged 4-18 years old. For more information and to sign up now, click here.